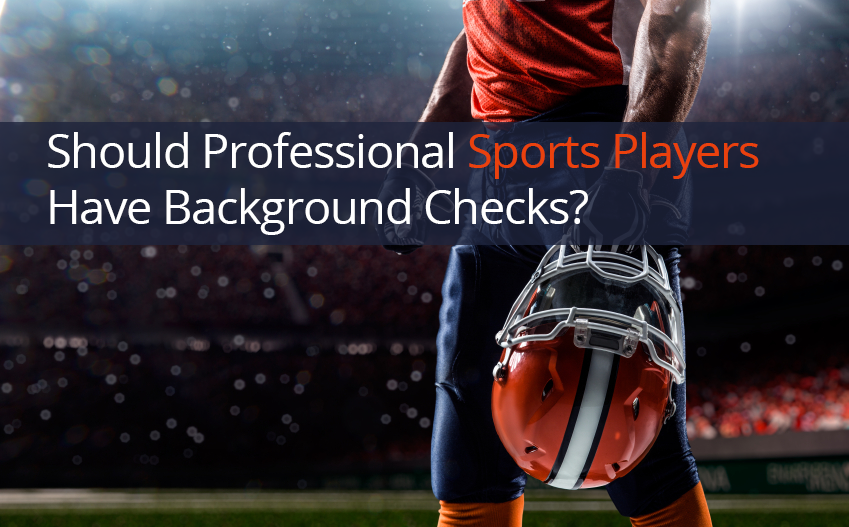 As a spectator to professional sports, you expect that the person at the concession stand isn't going to steal your credit card number. You rest easy that the stadium security will keep you and your family safe.The reason you expect those things is because the stadium staff has been through a hiring process that included background checks and training. What about the team on the field? Are they held to the same standards?

With so many stories in the news about professional sports players, you might begin to wonder if athletes are held responsible for their actions off the field. Stories like New England Patriots' Aaron Hernandez, recently sentenced to life in prison for the murder of his friend, and Ray Rice's allegations of domestic violence, leave us all wondering if things like this could have been prevented. These stories are not only in the NFL - there's a Wikipedia page of professional sports athletes who have been convicted of crimes. This list includes everything from professional soccer, baseball, basketball to figure skating (remember Tonya Harding?) and tennis.

It may appear that these athletes are held to higher standards of behavior. After all, they are in the public forum and many children idolize them as heroes. The athletes are taken from relative obscurity and put into a position with better finances and opportunities. Sadly, not every person thrust into the spotlight has a spotless record behind them.

Scouts keep their eyes and ears peeled for up and coming athletes. Rare talent raises eyebrows and the salary a scout can make by bringing the athlete to the team. Even still, the character of the athlete matters and is observed as closely as their athletic ability. As draft day draws nearer, some teams are going above and beyond to find out more about a potential prospect. This can include anything from pre-draft interviews, discussions with high school coaches and study of the athlete's social media. Professional sports teams are learning from the aforementioned news stories that they need to protect their reputation and the amount of investment they will make in a prospect.

More major league sports teams are vying for background checks, in some cases, hiring their own private investigators and former policemen as head of security. Athletes are being scrutinized for substance abuse, arrest records, and any other criminal activity. In fact, some colleges are considering background checks on student athletes due to criminal activity as well.

Recently, the Buffalo Bills removed several candidates from draft consideration after running background checks. Even still, the Bills' coach was left defending his actions because a few of those he did let in are under suspicion for domestic violence and witnessing a rape. Does this mean that professional athletes aren't held to the same standards as any other candidate for a job?

See also: Does a Criminal History Mean No Hire?

Many young children look up to professional athletes and hope to one day stand on the same court or field in a uniform. Some of them actually will. However as long as professional sports continues to allow athletes to participate, when they are clearly conducting criminal activity, some parents may steer their children in another direction. Thankfully, sports teams are listening and taking the steps to ensure that the sports heroes on the field are actually admirable off the field too.