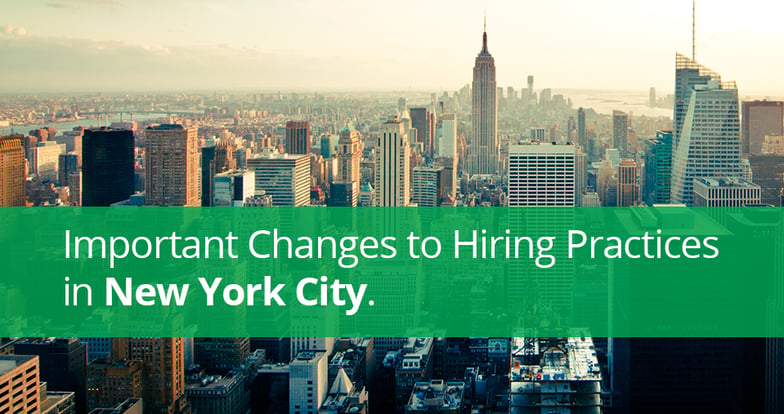 New York City has made some sweeping changes this year with regards to hiring practices.

Credit Checks as a Condition of Employment

In April of this year, a bill passed with overwhelming approval making it illegal for most employers to use credit history as a condition of employment. The bill will amend the New York City Human Rights Law and prohibits employers from discriminating against an applicant based on their consumer credit history.

The only exceptions to the rule are employers who are required by state or federal regulations or agencies to use an applicant's credit history when making an employment decision. Also, the law will not apply to those who are in certain trust positions such as:

There has been much discussion with regards to hiring practices and applicants with a criminal record. Many states have already adopted the practice of banning the check box that asks applicants if they've ever been convicted of a crime. In June, New York City passed their version of the practice - The Fair Chance Act. The bill, which received overwhelming support, will also go into effect 120 days after it is signed by the mayor.

See also: What Employers Need to Know About Ban the Box

When the new bill is enacted, those with prior criminal convictions will not be discriminated against early in the hiring process. The applicant's chance of getting to an interview and background check increase since their application isn't automatically dismissed upon seeing a "check" in the box. The Fair Chance Act also prohibits hiring managers from asking about criminal histories until after an offer of employment. If a criminal conviction is uncovered at that point, the hiring manager may rescind the offer but only after a discussion with the applicant and an adverse action notice.

New York City joins several other states that have enacted similar laws. These regulations, as well as the ongoing additions to the EEOC and FCRA, could become confusing or overwhelming to a human resources manager. Corporations that operate in several states, including New York City, may want to revisit their hiring practices and ensure compliance.

Both bills go into effect within a few months. As a business owner or human resources manager, gaining a clearer understanding of these bills will ensure that compliance isn't an issue. Check with your company's legal counsel to make sure you are ready.