How and Why to Have More Vulnerable Conversations in the Workplace 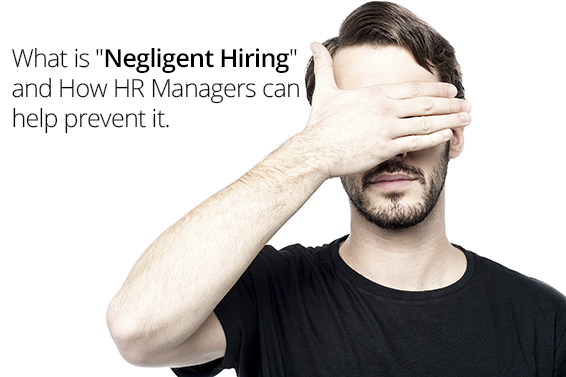 With news accounts of Uber drivers being accused of rape and police officers accused of suspicious deaths of people in custody, negligent hiring claims are in the news and on the rise. Negligent hiring is a legal claim made against an employer when there is failure to take action to prevent damage given the authority of the employee’s position.

Employees hired represent a company. The company can be held responsible if employers are negligent in ensuring the employee doesn’t harm another person.

Negligent hiring claims can be avoided if HR managers do due diligence on applicants before they're hired.

Consistent and updated human resources policies are an important part of preventing negligent hiring. Hiring and promotion policies will document the background checks and other tests that would be run at every level of job position in your organization. Your HR department should be well trained on these policies and they should be updated regularly - especially as situations arise that challenge the current policy.

Not every job position will require numerous in depth background checks. Depending on the access to secure information and people, especially children, those in poor health or the elderly, certain criminal background checks should be required. A position that requires driving should have an extensive check of their driving records and if their license and insurance is valid and current.

Federal regulations, including the EEOC and the FCRA, require certain forms and documentation during the hiring process. These forms also should be maintained in a particular way for a certain length of time and destroyed in an approved way. Electronic forms, including applications, consent to background screens and drug testing, are easier to maintain and should be considered.

When an employee is initially hired, part of the hiring process is generally a screening of the applicant’s background. An employee who continues to gain more access to people and information should be screened regularly or at the very least, at every promotion. Annual criminal background checks and drug testing can be performed and should be included as part of the employee agreement upon hiring.